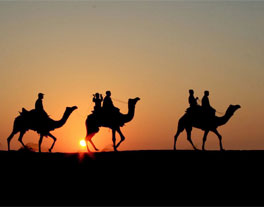 Once a sleepy desert city, Jaisalmer has transformed itself into a major tourist destination of India. Situated amid picturesque Thar Desert, the Jaisalmer city commands premiere position among the tourist attractions scattered all over the desert land of Rajasthan. The Jaisalmer city is revered both by Indians as well as foreign tourists.

Like various other cities of Rajasthan, you will discover different facets of Jaisalmer as you explore this wonderful city with us. Tough there are historical monuments scattered all over the city but the Jaisalmer Fort will immediately command your attention. Made of sand stones and locally known as Sonar Quila, the Jaisalmer Fort is a dominating structure amidst sands. The Jaisalmer city is also known for its old mansions, better known as Havelis. Among many of them you will find Salim ji ki haveli and Nathmal ji ki haveli as the most striking. There are other monuments too, which are equally important because of their distinct and individual architecture. The amalgamation of ancient and the medieval era architecture will catch your fancy.

The Jaisalmer city is a prominent educational as well as cultural hub in the region and regularly showcases the vivid cultural aspects of Rajasthan . Among others, it includes folk dances as well as semi classical and folk music. The city is easily accessible and people are warm and welcoming. In spite of harsh living conditions, Rajasthani people are known for their warm hospitality all over. So come to Jaisalmer and enjoy the traditional rhetoric of 'padharo mahare desh' (welcome to our lands).

The History of Jaisalmer has a charm of its own. Like all other cities of Rajasthan, Jaisalmer too has its own glorious past to boast about. History of Jaisalmer draws heavily from the history of the Rajputana. The city is said to be founded by one Raja Rawal Jaisal, a Bhatti Rajput ruler, in approximately 1156 A D. Legends go by that he did it on the behest of a local hermit named Eesaal. The raja choose Trikut hill as the new site for his fort. This was because he thought that his previous abode at Luderwa (16 km from present Jaisalmer) was vulnerable towards possible enemy assault.

In medieval times, Jaisalmer continued to be on the focus of the masses because of its location. It falls in the way of one of the two routes, which connected India from Persia, Egypt, Africa and the west. The Bhatti Rajput rulers were still in line. They were the sole guardian of the city and thus mustered enough wealth through taxes levied on the passing caravans, of which there was no scarcity. For many years Jaisalmer remained out of bound from the foreign rulers partly because of its location and partly because of its relief. In the mid Thirteenth century, Ala-ud-din Khilji, the Turk-Afghan ruler of Delhi laid the siege over the city. He was apparently upset with the Bhatti Rajput rulers because they stopped and looted one of his caravans containing royal coffer which was on its way to Sind. The siege lasted for around 9 long years and when the fall seemed eminent the Rajput womenfolk of the city committed Jauhar (self Immolation to avoid disgrace).

It is said that Duda, the son of Raja Jaisimha, fought vehemently in the battle but was overpowered after the fierce hand to hand combat. He died fighting. His descendants continued to rule the city. Though they had a cordial relation with the Mughal rulers in Delhi, they fought unsuccessfully with Emperor Humayun. Emperor Shah Jahan gave the right of governance to Sabala Simha, who had the royal patronage and had shown remarkable valor to win the Battle of Peshawar.

In the modern era, Jaisalmer was still a tough nut to crack and was the last among the Rajputana royals to sign the 'Instrument of Agreement' with the British establishment. Even that was achieved after long hours on the negotiation table and after much cajoling from the British establishment in India. In the year 1947, royals signed the agreement to remain in just independent India. Since then it has developed itself into a major tourist destination as well as a cultural hub of the western India.

Situated amid picturesque Thar Desert, the Jaisalmer city commands premiere position among the tourist attractions scattered all over Rajasthan. The Jaisalmer city is revered both by Indian as well as foreign tourists.

Who would have dreamt in such a vast sand oasis a castle worthy of an ancient throne, such an art in carven work of stone? It is like straight out of an Arabian Nights fable. The name Jaisalmer induces a dramatic picture of utter magic and brilliance of the desert. The hostile terrain not withstanding the warmth and color of people is simply over whelming.

Like various other cities of Rajasthan, in Jaisalmer too you will find different facets of its own glorious heritage too. Tough you can find historical monuments scattered all over the city, the Jaisalmer Fort will immediately command your attention. Made of sand stones and locally known as Sonar Quila, the Jaisalmer Fort is a dominating structure between the sands. The Jaisalmer city is also revered for its Havelis. Among many of them you will find Salim ji ki haveli and Nathmal ji ki haveli as the most striking. There are other monuments too, which are equally important because of there distinct and individual architecture. The amalgamation of ancient and the medieval era architecture will catch your fancy.

Had enough of architecture jargons, move out of it. Visit Gadsisar Lake and take a close look on the migratory birds as they indulge in amorous fight. Or else visit Desert Cultural center to take a sneak peek of Rajasthani culture. There is enough to keep you busy for days in Jaisalmer itself.

Summer: The weather and climate of the Jaisalmer is Arid in nature typical of any Desert region. Summers are hot but winters are relatively very pleasant. Jaisalmer is very hot in the summers. Summer season persists from April to August. The daytime temperature remains very high and usually touches around 42 °C. Nights are relatively cooler typical of arid desert climate and the temperature comes down to as low as 25 °C.

Winter: Winters in Jaisalmer are a lot cooler with day temperature remaining pleasant around 24 °C. And nights are chilly with temperature getting as low as 7 to 8 °C. The winter falls around Mid-November and continues till February end.

Weather in Monsoon: As Jaisalmer is situated amid Thar Desert monsoon is as good as negligible. Though western disturbance brings around 15 centimeters of annual rainfall, Jaisalmer remains dry for most parts of the year.