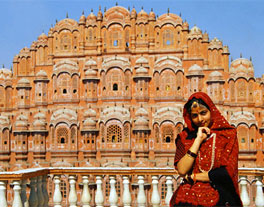 Jaipur is a beautiful tourist city in the state of Rajasthan. The city is easily accessible from other important cities of India. The planned city possesses many garland forts and palaces. Picturesque gardens in the land of maharajas fills the air with the aura of romanticism. The Jaipur city also called as Pink City presents a colorful Indian society with rich reserves of cultural heritage. The structures built by Maharajas reflect the local as well popular culture of India. The crafts of Jaipur have ensured a prominent place for the city in the world of arts and crafts. Festivals and fairs in Jaipur are as lively as the city itself. With some of the best hotels in India located in Jaipur, the city is every tourists dreamland.

Jaipur is a great city and this is testified by the structures in Jaipur. Palaces, luxury hotels and havelis present the splendour of living. The city has been named after Maharaja Jai Singh II. The city of Jaipur was built in 1727 A. D. according to well defined architectural design and plan. It is considered as the oldest planned city in India. It took four years to complete the construction of the city.

Maharaja Jai Singh built the city primarily with the intention of safeguarding the population of Amber by avoiding confrontations with the mughal kings. The terror of king Aurangzeb had caused the feelings of insecurity every where. The other reason was the scarcity of water in Amber. The king himself was much influenced by astronomy and architecture. The maharaja summoned a Bengali architect Vidyadhar Bhattacharya to met his plans.

Vidyadhar Bhattacharya laid down the plans according to ancient Hindu treatise on architecture called 'Shilpa Shastra'. The city was built in nine rectangular blocks. Seven of these blocks were meant for the public and the remaining two consisted of palaces and state buildings. The city was further encircled by the city wall and entry was through seven gates. The maharaja also built an observatory in the year 1728 A.D. which is one of the attractions in Jaipur. Jaipur got its paint following the visit of a royal family member of United Kingdom. It is believed that the availability of pink color in large quantities was responsible for painting the walls and building pink.

The city of Jaipur is quite an interesting place. The blend of traditional and modern culture provides the entire city with a unique identity. The capiatl city of Rajasthan is not afterall a dumb place and the daily monotony is broken by several activities one can indulge in. After exploring the famous monuments of the city you can relish the scrumptious recipes served by the restaurants in the city. To have a real bite check out the Choki Dhani restaurant on Tonk Road. For a cool and refreshing drink try the famous Lassi (yogurt) at famous "Lassiwala", on MI road.

If your appetite seems to drag you away from food then try for a theatre performance. Local theatre is an ideal place if you want to rest for a while and amuse yourself by just moving your eye balls. Band playing is a great idea and the peformance by local artists at theatres makes the trip worth it. Puppet shows are common features of most of the theatres in Jaipur. Jaipur city has got many theatres and the big names goes like Alka, Ankur, Cine Star, Galaxy, Gem, Golcha, Saroj and Space. The city also has many cinemas and some best ones throughout Asia. A movie at Raj Mandir near Panchbatti, MI Road would be an accomplishment, provided you get the ticket.

Crafts at the rate of money is a good deal in Jaipur. People who love shopping will find a great time in Jaipur especially the connoisseurs. Jewellery and metal works of Jaipur scintillate more in the eyes of tourists than shop windows. The exquiste blue pottery, batik paintings, printed textiles and stone carved artefacts are superb collections.

If you are still worried about what to do in Jaipur then for a change jump onto an elephant's back and enjoy the joy ride. Now we surely won't expect you saying that actually you don't like the tusks of the animal. In that case you better look out for a camel ride. These animals are really cool in the dry and hotlands of Jaipur. See a Indian Movie at Raj Mandhir (Asia's best movie theater), near Panchbatti, MI Road.

Jaipur has extreme climate very much like the northern parts of India. There is a large variation in temperature scales for summers and winters. In summers the temperature rises to a good above 40 °C and in winters drops to about 8 °C. In winters the temperature goes to a maximum of 22 °C. It is quite hot in summers and the winters are chilly. However, the intervening period between October and March is the best in Jaipur.

The city receives little rainfall throughout the year. An average rainfall of 64 centimetres is received by the old city. Monsoon starts in the third week of July, but the state does not experience much of rainy days. In late June come the monsoon which provides great relief. It is preceded by dust and thunderstorms while the post-monsoon season in September is followed by another hot spell.

The cold winter evenings are accompanied with fog that envelops the city in the evening. As such there is less visibility which hampers the traffic in and around the city.