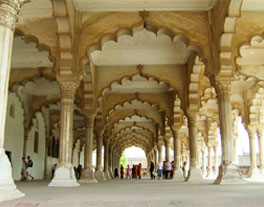 Agra is a major tourist attraction as it contains one of the seven wonders of the world - Taj Mahal. Agra is an ancient city situated on the river Yamuna within the stae of Uttar Pradesh In India. The city has been described as Agraba in the epic Mahabharata. The city was capital of Lodhi Kingdom and later on seved the same for Mughals. During 16th and 17th century the city was developed as art, culture, commerce and learning center by Mughal kings like Akbar, Jehangir and Shah Jahan. Some wonderful buildings were erected in Agra City by the mughal kings. Agra city is famous for monuments and crafts. The monument and crafts have preserved the cultural heritage for centuries.

Agra is believed to be the dwelling places of Aryans. A rich civilization flourished in the city somewhat close to 2nd century B.C. It has been referred as 'Arya Griha' or the abode of Aryans. The earliest accounts of Agra can be found in the epic Mahabharata. The city has been referred as 'Agravana' which used to be a part of Surasena Empire. History seems to have lost it untill its rediscovery by the Mughals. The first concrete evidence of Agra can be found in the poems of Khwaja Masud bid sad bin Salman. According to the poet Mahmud Shah the governor of Hind (presumably parts of the Punjab and the North-west region) invaded the Fort of Agra in 1080-81. Very few records confirm to the establishment of a fort before the arrival of Mughals.

Agra was specifically mentioned in the reign of Syed Allauddin (1445-51) as a dependency of Biana. The narration of Niamatullah contradict the fact and according to his accounts the city was built by Emperor Sikander of Lodhi which had no prior existence. Ibrahim Lodhi, the last Sultan was killed and the empire terminated in 1526 A.D. It was here in 1530 A.D. that Babur breathed his last and Humayun was crowned. The city was soon developed and made the commanding centre. Humayun was defeated by the Afghan ruler Sher Shah. However, in the second battle of Panipat that is in 1556 A.D. Iskander Khan defeated the Afghan ruler Hemu on Akbar's behalf and mughals claimed the city. During Akbar's period the developments in and around Agra reach its zenith. This was followed by his successors Jehangir and Shah Jahan. In 1658 Aurangzeb took the throne and shifted his capital to Delhi leaving behind glamorous history of Agra.

Agra city is located in the city of Uttar Pradesh on the banks of river Yamuna.

Agra city is famous for its structures built by Mughal kings during their reign. Taj Mahal, one of the greatest symbols of love is the prime feature of Agra. The mausoleum is visited by thousands of people from all over the world. Besides Taj Mahal there are a number of architectural marvels in the city. These marvels include Agra Fort, Itmad-ud-Daulah's Tomb, Sikandra, Jama Masjid, Mariyam's Tomb and Chini-Ka-Roza.

The best time to visit Agra is between Oct and March. It is not hot than and there are few rains during this period.

The city of Agra is located in the state of Uttar Pradesh in the northern India. The city has extreme and tropical climate. Summers in Agra are extremely hot and the maximum temperature goes upto 45°C. The winters are cold with temperature dropping to a minimum 4°C. The days are often foggy in winter with reduced visibility. The monsoon season which is around the period July to September is humid and the place receives heavy rains during the season.

The most comfortable is the winter season and it is the right time to visit Agra.